The woods tells us a story: let’s listen to it reading his signs! 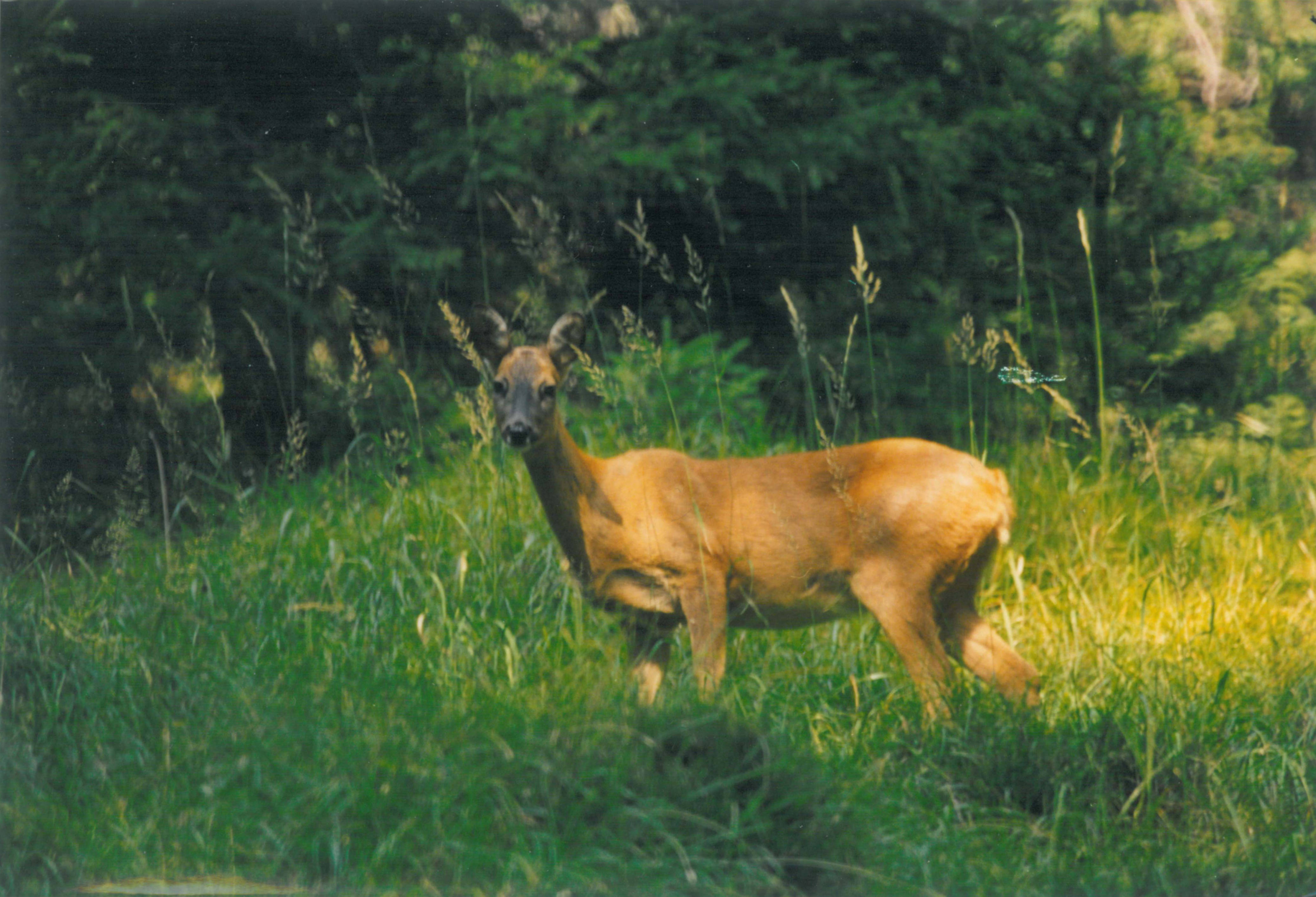 In the wood we listen, observe and explore

The days without a goal, those in which I do not want to sweat under the sun on screes and rocks, those in which it would be enough to put my nose out of the house and then return quickly to fulfill the duties of everyday life……. especially those often give me strong emotions and a wealth of incredible energy: these are the days when I find myself walking in a forest!

I enter the forest distractedly, almost lazy, but step by step I realize that my mood is changing: The eye is captured by the intense color of the leaves, the design of the sun rays that filter through the trees and little by little I find myself observing with scrupulous attention all that surrounds me.

It happened again: it tripped in me that irrepressible impulse to communicate with the forest! I feel like one with it, part of something big and powerful, but together shy, stealthy and delicate.

That’s when the forest is populated by the passage of animals and men who have been there before me and have left signs that talk about why they were there and what they did before even I arrived in the same place…… it’s a fascinating and engaging progress because the woods tells us a story!

It happened to me today, which is the beginning of autumn, but it is the same intense emotion even in winter!

Conepine gnarled by a squirrel

I smile every time I find a gnarled spruce pinecone and I try to understand who was to eat so eagerly the seeds, spreading around the scales!

If I find it well cleaned I think of a squirrel or other rodents, which with their sharp teeth manage to make an excellent cleaning up. But if I find it a bit ‘ frayed, I imagine a jay that a bit clumsily tries not to miss a food so greedy!

At home we even have a sui generis “collection”: in a box the cones nibbled by squirrels, in another one eaten by the jays. Maybe we are a sui generis family too….

And the muddy puddles? A paradise for the exploration of footprints!! Crazy stuff: have fun figuring out if it was is a deer or a roe deer that passed by, if it were a small or an adult, whether it was in a hurry or not! Large, small, tapered or more bellied, with pliers spread or narrow…: it is not always easy to distinguish them and probably many times I was wrong to interpret them. It doesn’t matter, it remains the fascination that a wild animal has passed just beyond. 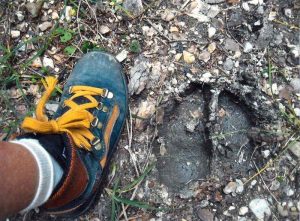 But in the mud the footprints of bicycle, motorbike and shoes are also impressed. Here wakes up a kind of female curiosity, a “minding others business” trying to decipher the size of foot of the shoe, in which direction they have gone, how long before they have passed. Curiosity end in itself, but funny and sometimes useful. Once I arrived at 9.00 in the morning on the top of the Col Bechei and down to the lake of Limo I met a friend who told me that he had soon resigned himself for not having met any animals. He had seen my fresh mud footprints on the stones of the trail!

And speaking of someone who leaves clear traces, the woodpeckers are certainly no less. It’s always amazing to see how accurate work this amazing bird can do. 20 blows of beak per second, for a total of 800-1,200 strokes per day: a real professional striker!  The holes and the horizontal “cercinature” that it leaves on the trunks of the trees are the unmistakable sign of its passage. 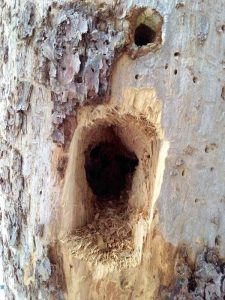 Detail of a hole 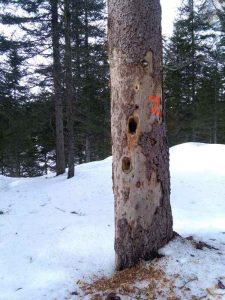 Hole in a Spruce

He is also a fundamental link of the food chain and the proper functioning of the mountain habitat: if there were no weaker trees assaulted by cortical insects, the woodpeckers would not eat their larvae; If there were no woodpeckers these insects would spread out of proportion to the detriment of the forest ecosystem; If the woodpeckers were not a regular stonecutter of logs, other smaller birds such as the nuthatch and the dwarf owl would not find a nest. 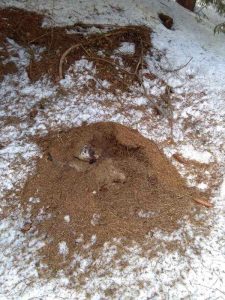 Then winter arrives and hungry capercaillies (wood grouses) and woodpeckers are looking for delicious larvae of ants, raving their nests. Poor ants: pillaged and with the anthill destroyed while they are slumming and helpless. Well, it seems this is the cycle of life…

Eaten bark of a spruce

Even the ungulates can suffer hunger in the winter months and, especially if it is a winter of much snow, they are content to find nourishment by eating the barks of the trees. It happens then that once the snow melts in spring, you see these traces high enough, far from the ground and all at the same level: This gives us the idea of how deep the snowy mantle was!

The beauty of the snow for a footprints hunter is that the passing of the animals becomes quite obvious. Squirrels, mice, deer, hares, foxes: each with its typical gait, each one probably looking for food or shelter. 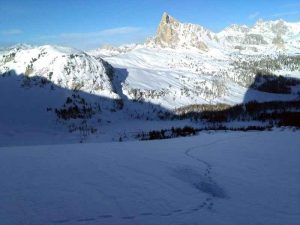 Then it is as if I saw the fox that has passed zizaging in his frantic search for food and smells, see his head that jumps in the snow after he has picked up the presence of a prey under the blanket, see his tail that often touches the snow and leaves a characteristic strip on the surface. 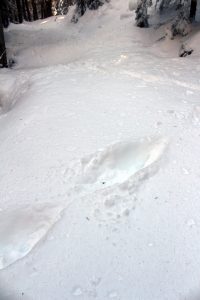 Deer traces in the wood

You see the deer, which heavy and robust sinks in the snow to the belly, leaving grooves that make you imagine his slow proceed.

You see a little mouse or a vole, that can leave a slight embroidery on the snow, without ever sinking inside. But what will he have gone out to do? The fingerprints go far… strange that the fox didn’t hear it!

You see the squirrel, on a day of good weather he came down from the tree in search of one of his many food hideout.

You see the curious marmots, who in the early spring heat have come out of the den to see how the world is out there.

In short….. browse, explore, pay attention to the little clues: the woods tells us a story! And remember: you are also part of this story!